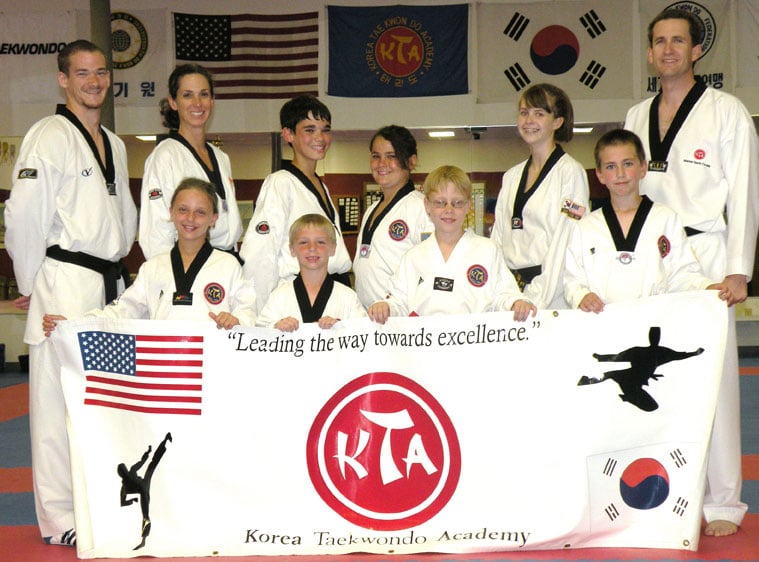 We had an exciting week at the U.S. Junior Olympics and Poomsae Team Trials in Austin, Texas.

This year saw KTA Castleton sending virtually a completely new team to the national level.  In fact, the only ones returning to this level of competition were myself, Colette Goad and Kristi George – after a 17 year hiatus from national competition.  It was exciting to have so many first time competitors.  It gave them an opportunity to participate against the very best in the U.S. and build on this experience for next year.

Mr. Tom Gaber also represented KTA as a Referee for both Junior Olympics and the National Poomsae Team Trials.  This was his second year at this post.  He continues to grow and improve in the area of officiating and did an outstanding job.  For all of you who are aspiring referees, I recommend you talk with him and learn more about his experience.  We hope to have more Referees representing us next year.

Kaitlin took 2nd Place in Board Breaking and 2nd Place in Sparring.  Marie took 3rd Place in Forms.  Sean made the Top 8 in Forms.  Gabby lost her first round in Sparring.  Levi narrowly missed medals in both Form and Sparring.  He took 4th in Forms and barely lost his quarterfinal match in sparring.  Had he won the match, he would have been guaranteed a medal.  Day one was very exciting and fun to watch!

Jackson Dunlavy was our lone competitor on the second day.  He stayed busy and kept us entertained all day long taking 1st Place in Form, 1st Place in Board Breaking, and 2nd Place in Sparring.

On day three, Colette competed and made it to the final round in Forms.  She also ran in to a tough competitor and lost her first round match in Sparring.  Although she did not place in either event, everyone noticed a marked improvement in her technique and poise from last years Junior Olympics.  The future looks bright.

KTA Northwest also sent two returning competitors, John Ramsey and Quinn Quinn, this year.  They both did an excellent job with John losing a heartbreaking decision in his first round match, but placing 2nd in Breaking.   Quinn took 3rd Place in Breaking.

Day four saw Adam George competing in Sparring but he did not advance.  The Black Belt 14 – 17 Division is by far the most competitive of the Junior Olympics and Adam will have three more years in this division.  We are confident that with more experience Adam will be in the medal rounds soon.

All of our Juniors had a great attitude and showed great team spirit throughout the competition.  I am proud of all of them.

I was very impressed with both Kristi and Jane!  They did very well for the amount of time they were able to train for this event – especially with family and careers taking the priority.  Both are on for next year and we all hope to advance further in our individual and pair categories.

I am also happy to report that I took 1st Place along with my team mates, Masters Turgeon and Southwick in the 36+ Male Team category.  We will be representing U.S.A. at the World Championships later this year in Cairo, Egypt!

Adam George competed in the Junior Poomsae Team Trial on our final day.  He did not advance, but he did do very well and he shows potential.

Noticeably missing from the competition was Jeremy Raymer.  He sustained a foot fracture in competition a few weeks ago which prevented him from representing us at the National Championships.  Despite his setback, Coach Raymer still attended the competitions this past week and was very instrumental in the success of our team.  He did an excellent job coaching and motivating our juniors and supporting us all.  Be sure to congratulate Mr. Raymer when you see him in class!

Also, thanks to all the supportive parents of the kids who competed.  Everyone was very positive and encouraging.  We enjoyed many nice meals together when we were not at the competition and the team bonded well.

Next year’s Nationals, Junior Olympics, and Poomsae Team Trials will be held in Orlando, FL.  All of those mentioned above have already set their goal to compete again next year.  There are many other KTA students who have the potential to compete at this level.  It is a lot of fun and great experience.   If you are interested in competing next year, please let me know now so we can set training and competition goals for you now.

I look forward to seeing everyone in class this week and at our KTA Family Picnic this Saturday!